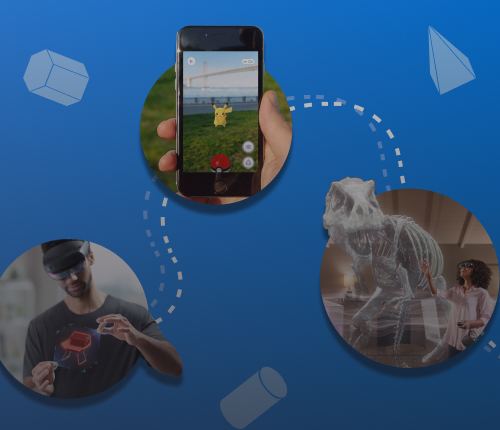 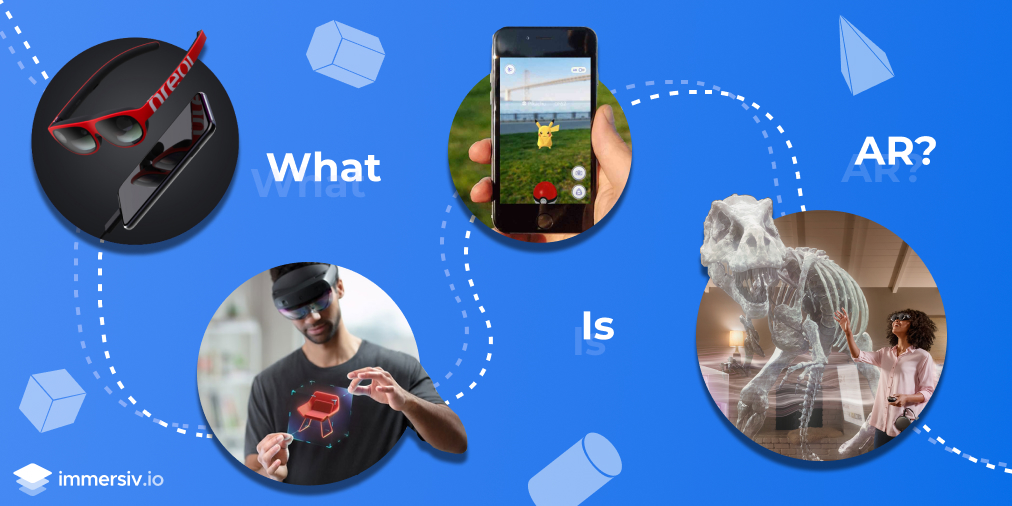 Understand AR with a simple definition

”In a few words, AR is the real world with an added layer of virtual content (2D/3D).

Literally Augmented Reality means “augment your reality”, a.k.a the real world with extra layers of digital information projected into it, as AR combines the physical world with computer-generated virtual elements overlay. These 2D or 3D virtual content are projected in reality within people’s field of view (through smartphone camera or smartglasses), with the intent to make the physical and virtual world recognize each other & interact together with the help of computer vision and machine learning.

It’s also the reason why AR is technically a huge challenge: the virtual & real world must coexist perfectly, and digital information has to recognize the real world, with its obstacles, natural objects, buildings, or people’s gestures, faces etc… To permit smooth interactions with it, all this in real-time, which remains quite complicated for now. Most of the time the AR content is also responsive to the user’s input.

What’s the differences between AR & VR?

If both offer new ways to immerse people and enhance their vision with the help of technology, they do in really different ways. Whereas virtual reality completely replaces what people see and experience, augmented reality actually adds to it. Obviously, the experiences, technologies and devices used are quite different.

”In VR you are completely immersed in an entirely virtual world. AR allows you to still experience the real world but enrich it with customized content.

Virtual Reality (VR) is a computer-generated simulation of an alternate world that completely immerse the viewer onto an artificial environment, offering a synthetic experience with no sense of the real world. It requires specific sensory equipment, headsets and gloves, and interactions within this alternate reality are digital and not responsive to the real world (excluding hands tracking system that recognize your hands and their movements in this alternate world).

Augmented Reality (AR), as we said before, relies on a real-life view of the world with virtual images projected into it (generally through the camera of a mobile phone). The real world remains central to the experience and is enhanced by virtual elements that generally interact with it.

If today, VR is probably gathering the most well-known immersive experiences, with many experiences available in video games, entertainment (such as theme park and escape game) or is used for training and education in different industries, no doubt that augmented reality will completely flood the market in the future.

”I see AR as an everyday tool that you can use for a lot of different things, similar to how we use our smartphones today. VR is more useful when you really need a deep sense of immersion, as it is the case for some video games, for storytelling or even for teaching.

AR adoption will be less painful (as VR is also recognized to be physically disconcerting, causing headaches, vertigo, nausea, or loss of reality…) and AR’s possibilities with these interactions between real & virtual worlds will open a completely new way to see the world and evolve in it.

It is always possible to see one’s environment in AR, which is not possible with VR. This is one of the crucial differences that makes AR likely to be more social and human while VR will remain predominantly individual.

Based on image recognition, it requires the use of a smartphone camera and visual markers to push AR content. It may be anything, from a printed QR code to special signs (a brand for example). Thus, the marker initiates digital animations for the user, and can be a way to bring a 2D fixed image to life or provide customers with additional information.

The most interesting and challenging type of AR because it requires the device’s camera to recognize the environment, process the camera images (using computer vision and advanced machine learning models to detect which is what by comparing images) and then push a detailed range of data (animated 3D models, volumetric videos…) viewable from any angle or position and perfectly fitting the real world.

Today, these AR experiences are based on SLAM algorithms (simultaneous localization and mapping) & depth sensors (with sensor data calculating the distance to the objects).

”The AR device needs to be able to do SLAM (Simultaneous Localization and Mapping), that means it must be able to detect user movements (directions and rotations) and at the same time analyze data from its sensors to create a 3D representation of the world around the user

Depending on the content, different ML models can be added to better recognize the objects (for example to recognize & superimpose a 3D version of an object in a catalog), bodies, faces (like for Snapchat filters)…

Marker-less AR experiences allow to push AR content everywhere, once the place is mapped and the device localized, and to make it interact with the real world, from a simple wall in the street to a monument (with Snapchat’s landmarkers lenses for example).

It’s the form of AR that uses a technique called projection mapping combining cameras with 3D sensing systems to allow interaction. It projects synthetic light to physical surfaces to create digital overlays on it. The main advantages of projected Projection-based AR are all about sharing experiences without requiring any device in users’ hands, with projections onto real objects and surfaces that everyone in the place can see and interact with.

With AR, discover a new way to interact with the world

With augmented reality, we’ll find infinite ways of interacting & enhancing the real world. The main advantage of AR experiences is that content is interactive & personalized, as every person is able to interact freely with the content on his or her screen.

It opens a whole new range of creative content, erasing every limit of the physical world. That’s how Google recently brought dinosaurs back to life on the user’s screen by offering 3D high-end models that everyone can display at home.

For now, the most famous AR experiences are made for smartphones, as everybody is used to Snapchat & Instagram filters to enhance selfies and create enriched pictures of everyday moments. This spontaneous adoption of AR filters on social media shows that people crave for immersive interactions with an augmented view of the real world.

As a concrete example in retail, the app Ikea Place allows you to place your future sofa in your living room, in AR, to see if it fits your environment and match your colorful carpet.

Everybody has also heard off Pokemon Go, the Niantic’s mobile game downloaded 750 million times. The app, based on maps & GPS location, has created the biggest pokemon hunts in the world, allowing people to catch Pokemon in the street, gardens & monuments all over the world. Pokemon Go shows that all it takes is a good experience to accelerate mainstream adoption.

Apart from this type of experience, AR will have to show its daily usefulness to help consumers’ adoption.

”For a B2C adoption, I think AR will have to be more than just a gadget and really improve people lives. Privacy and ethical topics would need to be discussed as well. That being said, I think could be a revolution as the mouse was to the computer or the smartphones are today.

We’ve also shared some great examples of AR experiences in sports in a recent article.

As Tim Cook (Apple’s CEO) said oneday, “Augmented reality is going to change everything“. For now, AR still has a lot of challenges to overcome (improving occlusion, the process of creating 3D content & assets quality, connectivity, device’s computation powers, hardware components’ miniaturization…) and if AR on mobile is the first step and will gather most of AR experiences for a couple of years, AR on smartglasses will completely change the user experience. With smartglasses, users will have access to hands-free experiences, with content displayed directly in front of their eyes and an entire augmented vision of the real world.

The smartglasses’ market is in its infancy, with the Microsoft Hololens focused on B2B, & the Magic Leap, which is also a gem of technology but not really made for the mainstream. However, in the next 3 years, no doubt that Apple, Google, Facebook, Samsung and other giants will hit the market, following the Nreal Light, the first consumer’s glasses ready to come in 2020. For now, Apple and Google are improving their AR toolkits and sensors (with Apple’s LiDAR & Google’s Depth API) and show promising steps for AR experiences, to better recognize users’ environment & create realistic interactions between the digital & real world.

”AR will play a very big part in the evolution of the human / computer interaction. Today we interact with a small screen in our pocket, to get all the information we need, but very often it would be more natural and intuitive to display this information in front of us, or on top of a real object. For example, with AR glasses we could get directly navigation information displayed at the next intersection when looking for a particular place.

Within 5 years, it will be a complete mass market, with billions of AR-enabled devices and a brand-new way to see the world and interact with digital interfaces, and that’s why brands must take into account these technologies right now.

The more the technologies around AR will be reliable, the more storytellers, designers & brands will face opportunities & challenges to help consumers’ adoption.

One of the biggest challenges for augmented reality creators will be to succeed in playing with the current space in order to create stunning user experiences. For example, the game Fragments on Microsoft Hololens, perfectly uses current space recognition, with AR avatars sitting on your sofa, like they were here. 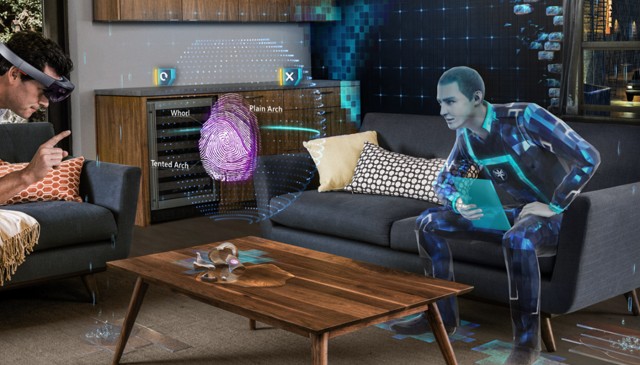