The future of sports broadcasting: innovate with AR

Today, watching sports on TV remains the most natural way to enjoy games when fans are not in the stadium. But, even if there is an illusion of diversification with the ways we can watch the competitions now (mainly through OTT platforms on smartphones), we’ve come to an era where traditional broadcasters must innovate & reimagine themselves for today’s fans, used to playing video games, and craving for personalized content & interactivity with their beloved teams.

The statement: The static broadcast experience is no longer a reference

Exclusive rights deals continue to raise huge amounts of money & have become the primary source of leagues’ revenues, so that the sports streaming is now completely locked into certain providers & channels, without really taking into account the way fans reach those channels & what they expect from the broadcast experience today. Even if this status quo is still stable and profitable for the sports industry, a lot of new media are retaining fans’ attention (from eSports NBA 2K tournaments to virtual concerts on Fortnite). It shows that, if the broadcasters didn’t reinvent themselves, fans will turn to more engaging forms of entertainment.

Today’s fans are no longer passive, they are looking for immersive experiences that let them interact more, learn more and participate (read more about the need for sports brands to reimagine the fan experience). Even remotely, they want to be able to rely on their communities and get the feeling to be part of something bigger. Younger fans, raised with interactive media and used to Twitch & Tik-Tok, will expect more from the sports streaming, and will quickly desert the linear & lean-back experience of sports broadcast (a statement made by the latest report of the Sports Innovation Lab).

Sports media, including broadcasters & OTT, must become more social & interactive, as a huge part of fans use a second screen during the game to bet, chat with their friends, access exclusive content from their favorite teams and analyze statistics… More than 58% of Millennials use social media to get updates on their favorite teams and players while watching the game, and 52% would be interested in using social media as a viewing platform for the game itself!

The Rise of OTT platforms: Yes but…

OTT platforms are becoming more important in the market, it is a global movement (with the disruption of the film industry first through Netflix, Amazon Prime & others) which is also impacting the sports industry. These platforms respond to a real need of today’s fans: Access games & content on different types of devices (from laptop to smartphone), at every time (with VoD content), via better user interfaces & access to exclusive content.

These platforms also completely redistribute the audiences, with the possibility for Europeans to get access to NBA or NFL games or Asian fans to watch Bundesliga football games. Fans have access to sports content from anywhere and everywhere in the world at any time and it’s a huge opportunity for sports brands.

But, for now, these platforms didn’t fit either the new fans expectations… Streaming content is just an alternative to TV, but games & content remains linear. The hopes & expectations around mobile sports with a more interactive & personalized fan experience are far from reality. Mobile & OTT today are just broadcast on phone, the networks simply shifted the traditional broadcast experiences onto digital devices. Conclusion: OTT AND traditional broadcasters must both innovate to create an engaging & interactive fan experience.

AR on broadcast & 3D videos: The first step to enhance the streaming experience

What we called augmented reality on the broadcast are graphics and digital content displayed on top of the streaming video. The common use of the expression “AR” for this is a misuse of language, because as we’ve already said in another article, augmented reality aims at enhancing the real world view of a user, but on broadcast it is more enhancing a video with graphics, not your own view of the real world, and the process of creation, development and implementation are really different.

But for now, graphics on the video are the first step to enhance the viewer experience on the broadcast. It allows fans to better understand the game, with for example Hawk-Eye graphics (see the gif above) to see the ball trajectory and speed over the tennis court when watching a tennis game. Throughout the game, these graphics allow broadcasters to display information, scoring, or specific ads by regions on top of the streaming feed.
More recently, with the help of computer vision, AI & live tracking technologies, broadcasters were also able to display live statistics directly on the video, to focus on a player during an action or add graphics of an attack/defense line when commenting on a specific action.

Another high-end system, like Intel TrueView also offers the possibility to capture the game from any viewpoints and get a complete match in 3D, to offer multi-angle replays & exclusive videos of the competitions for fans.

Nevertheless, the same problem remains with these innovations: They permit to enhance the TV feed, but not to create personalized content, as there is only one streaming feed with graphics for the entire audience that is looking at it: the lean-back experience remains the rule. There is no way to decide which graphics which fans want to display over their own experience or which camera angle they want to choose to watch the game.

The future of sports broadcast: AR & VR to create your own experience

At Immersiv.io, we strongly believe that the future of sports broadcast lies in augmented reality, with personalized content displayed by fans at their convenience on their own feed. How? AR content is displayed through the camera of a mobile phone or smartglasses, it allows each user to interact with their TV feed through their mobile phone or smartglasses by interacting with it, and to display information in AR around it (see more about ARISE, the AR interactive experience for sports fans at home).

AR, and to another extent, VR, will permit the creation of immersive media, allowing every user to display stats, social media feeds, betting crowds or other screens around their TV. It will be a revolutionary way to watch sports at home, or out of the stadium, by personalizing your feed depending on your interests (focus on a specific player throughout the competition, display different camera angles, or just analyze the game with AR graphics on the broadcast…). 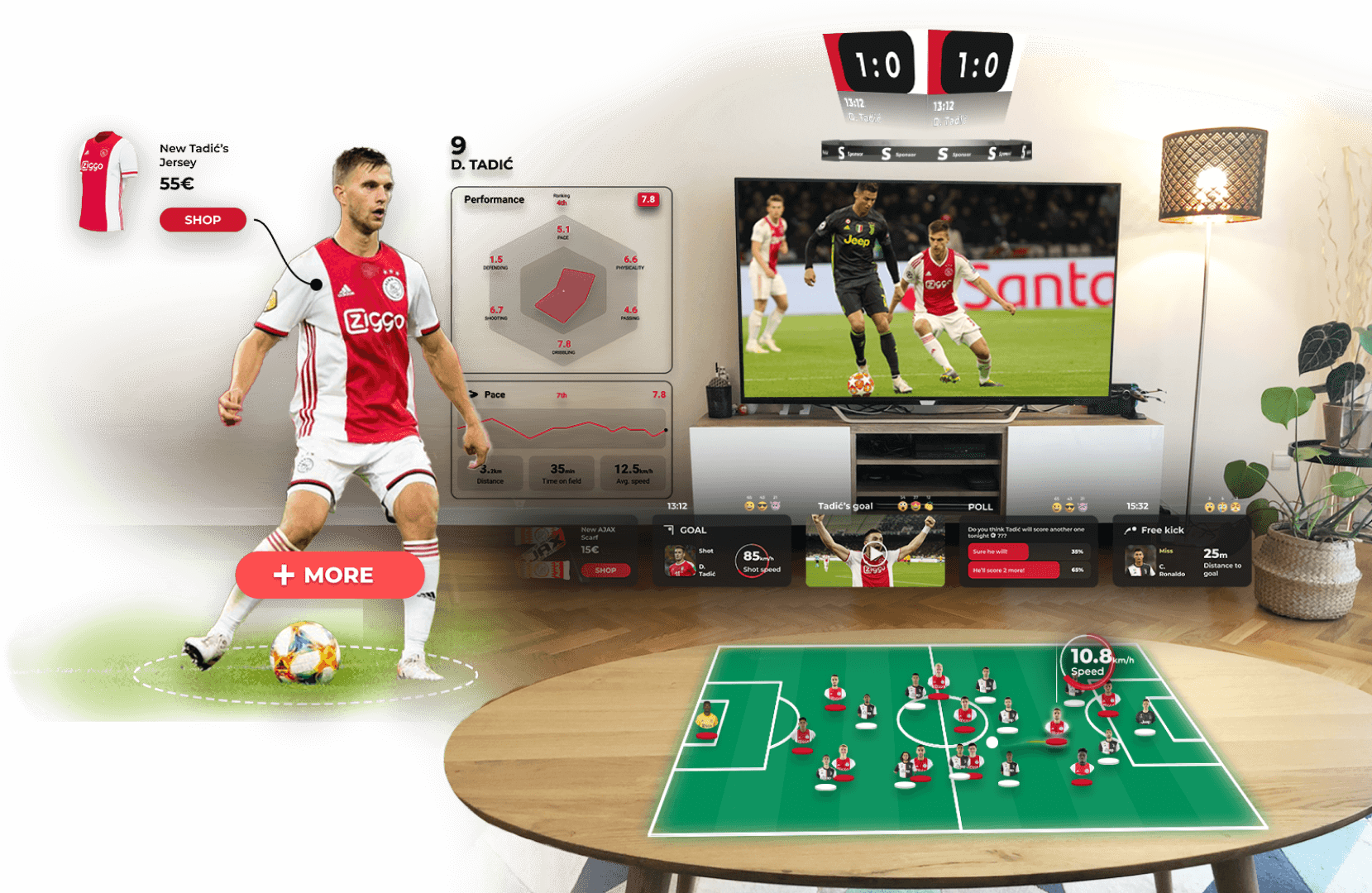 With the recording of entire games from every angle (like with Intel True View, other 3D video capturing or image-based 3D reconstruction technologies), it will also be possible for fans to display games live games in 3D on their tabletop, offering them the possibility to turn around the scene and review each action from different viewpoints.

With the launch of the Nreal Light, and the future launch of many AR glasses (Apple, Google, Samsung are working on it), sports broadcasters, as much as OTT platforms, should really take into account the future impact of AR/VR on their market.

More recently, the huge impact of the pandemic on sports shows that closed-door events and competitions out of the stadium are important and that remote fan experiences have to be improved. It also shows that sports/esports have many reasons to get closer, as sports fans, especially the younger ones, are also gaming fans, and are definitely craving for gamification of the streaming experience. These are also good reasons for sports broadcasters to reimagine themselves, by looking at other entertainment industries.

Sources:
Will The Next Battle In The Streaming Wars Determine The Future Of Sports? – Forbes
The Future of Live Sports Broadcasting – Front Office Sports
The Future of Watching Sports – Sports Innovation Lab
The future of sports broadcasting: Enhancing digital fan engagement – Deloitte